AMD’s Ryzen 7 5800X3D achieves incredible performance uplifts in certain applications by “simply” adding an extra 64MB of cache onto a Ryzen 7 5800X. We put “simply” in quotes because the vertical die stacking process employed on the chip is still cutting-edge stuff, and AMD had to make significant concessions to the original Ryzen chip’s capabilities to allow it to work.

Those concessions came in the way of the chip’s overclocking features, as well as a slice of its clock rate. Whether due to the cache die itself or the precarious bond between it and the Core Complex Die (CCD), AMD acknowledges that the Ryzen 7 5800X3D is less durable than the original recipe. It limited core voltage to just 1.3 volts on the new model, and also disabled Precision Boost Overdrive.

Precision Boost Overdrive is the package of features that most experienced Ryzen overclockers use to manipulate their processors’ properties. Indeed, almost every Ryzen processor released to date has officially supported overclocking, and AMD offers a robust toolkit for tuning its chips. That toolkit isalmost entirely disabled on the Ryzen 7 5800X3D, which makes overclocking the cores rather difficult, though the memory and Infinity Fabric speeds can we altered.

Note that we said “difficult,” not “impossible.” Despite what AMD’s Director of Technical Marketing told us in the livestreamed interview above, it is possible to overclock the Ryzen 7 5800X3D—it’s just tedious to do so and could introduce instability in other parts of the system. Overclocking the fat stack of silicon requires adjusting the processor’s base clock (or “reference clock,” more accurately) instead of using the tools provided by Precision Boost Overdrive.

On most motherboards, this isn’t going to get you very far. Raising the base clock will start to break everything else in short order—even 1 MHz is enough to start disabling things like SATA controllers on some boards. Over at SkatterBencher, they were able to take a Ryzen 7 5800X3D from 4550 MHz to 4741 MHz with the help of an ASUS feature called Voltage Suspension. Still, this isn’t a huge gain, and it only improved performance by about 4%. 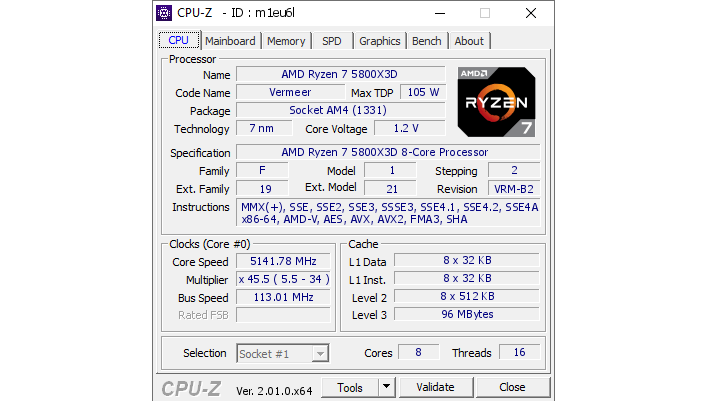 Well, MSI’s own in-house overclocker has apparently been playing with one of these processors. TSAIK, as he’s known, submitted a validation to the CPU-Z database with the Ryzen 7 5800X3D running at 5,142 MHz. That’s a pretty significant jump from the circa-4.5-GHz stock clock. As it’s just a CPU-Z validation, there are no benchmarks or anything else to gauge the performance impact of the overclock, but frankly looking at the details, it probably wouldn’t be that great, anyway.

To achieve that overclock, TSAIK had to raise the reference clock to 113 MHz. We don’t know what compromises that required on the MSI MEG X570 GODLIKE board he was using, but we do know that it required him to use only a single 8GB memory module running at just 1,205 MHz (2410 MT/s). Essentially, it’s a single stick running at JEDEC “safe” timings, and the only reason it’s 1,205 MHz instead of 1,066 Mhz is because of the increased reference clock.

As such, this overclock is probably just for bragging rights, not for practical use. Indeed, given the base-clock-adjusting requirement for overclocking the Ryzen 7 5800X3D, it’s unlikely to be a practical path for any owners of this CPU. Perhaps Robert Hallock was right after all.

Intel’s Arc Graphics Driver Adds A 3DMark Benchmark Toggle, Here’s What It Does

We will be happy to hear your thoughts

shrewdbuyz.com participates in the Amazon Services LLC Associates Program, which is an affiliate advertising program designed to provide a means for websites to earn advertising fees by advertising and linking to amazon.com

Affiliate Disclosure: As an Amazon Associate, we may earn commissions from qualifying purchases from Amazon.com. You can learn more about our editorial and affiliate policy.